Luke Garfield - Above All Things (CCM) 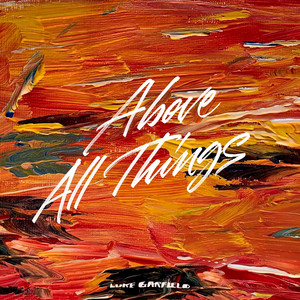 Luke Garfield has released a Christian Contemporary Music (CCM) track called 'Above All Things'.'Above All Things' is a song that Luke Garfield wanted to write after listening to a podcast interview. The person being interviewed was talking about a phrase from Colossians in the Bible, which speaks of Jesus: “For by him all things were created, in heaven and on earth, visible and invisible, whether thrones or dominions or rulers or authorities - all things were created through him and for him.”

Garfield says: "The phrase ‘created through him and for him’ really hit home like never before. All that was created good and pure was through Jesus and for him. That might offend some people who think Jesus sounds like a Greek or Roman-type god, who is greedy and wants everything for himself. But I believe those words are wonderfully rich and deep when you understand who Jesus is. When you read that in context of Jesus coming to seek and save the lost and when you read it knowing that Jesus says if He sets you free, you are free indeed."

He continues: “Then you start to understand that this wayward world was never meant to look the way it does and God had a plan to make it right through Jesus. Most of all, Jesus cares about us because we were made through him and for him - we are dear to him.”

From that kernel of an idea, Garfield started to take the rest of the first chapter of Colossians and created the lyrics for the song, 'Above All Things'. One of the earlier songs written for The Unseen album, 'Above All Things' has found a regular home as a live worship song in his local church for the past four years.

One other unique aspect of this release is the synesthetic artwork for the song. It was painted by friend and fellow musician, Fear of Flight (Aaron Shipway) who has an amazing gift of seeing the music he hears. Garfield is also filming a mini-documentary to explore synesthesia and the music of The Unseen album to be released later in 2022.

Verse 2.
Radiance and glory of God
The universe sustained by your word
Mirror of the Father’s heart
You were with him from the start

Bridge
You’ve delivered us from darkness
Brought into your kingdom
You reign.
Anchored to the hope of gospel
Sons of your kingdom
We praise.

You can listen to the track on Spotify: https://open.spotify.com/track/7IzQ5Sj2fHXQBj5kxg5aXo

Here is a link to the video on Youtube: https://www.youtube.com/watch?v=Jl-_X7Sl-uo