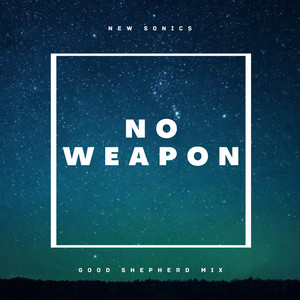 NewSonics has released a Christian EDM (CEDM) track called No Weapon - Good Shepperd Mix.
Judah shared with us the following background for the music track, for use on our website and social media: "I was in the mainstream music industry years ago but, HalleluYAH, Jesus delivered me and took me out before I became ensnared."
Background to the track, Judah continues: "I did this just before going to court where my son and his friend, who were in University at the time, were both being tried by jury. It came out in court that the story was made up and the police officer in the case was corrupt trying to get ahead.
They were both declared innocent unanimously by the jury.
The ironic thing, in light of all the racial tension in the world today, confirmed what I always preach and teach, that racism is a lie from Satan.
My son and his friend who are both "black" were being falsely accused by a "black" co-student and the police officer in the case, who was also "black", was exposed for withholding evidence and witness statements.
The judge, who was "white", wanted my son removed from the trial early, because he was obviously innocent. His solicitor who was "white" fought for him like a lioness and "white" jury members came to me afterward to shake my hand with regards to my son's good character.
God is good, HalleluYAH!"

You can listen to the track on Spotify: https://open.spotify.com/track/3xLze6pcWKKfodHRPHFrvM

Here is a link to the video on Youtube: https://www.youtube.com/watch?v=VTo_e3-u9L0

Would you like to hear more CEDM music? Then check out our Christian playlists on: https://www.christiandance.eu/playlists