Secrets Artists Should Learn About The Spotify Algorithm 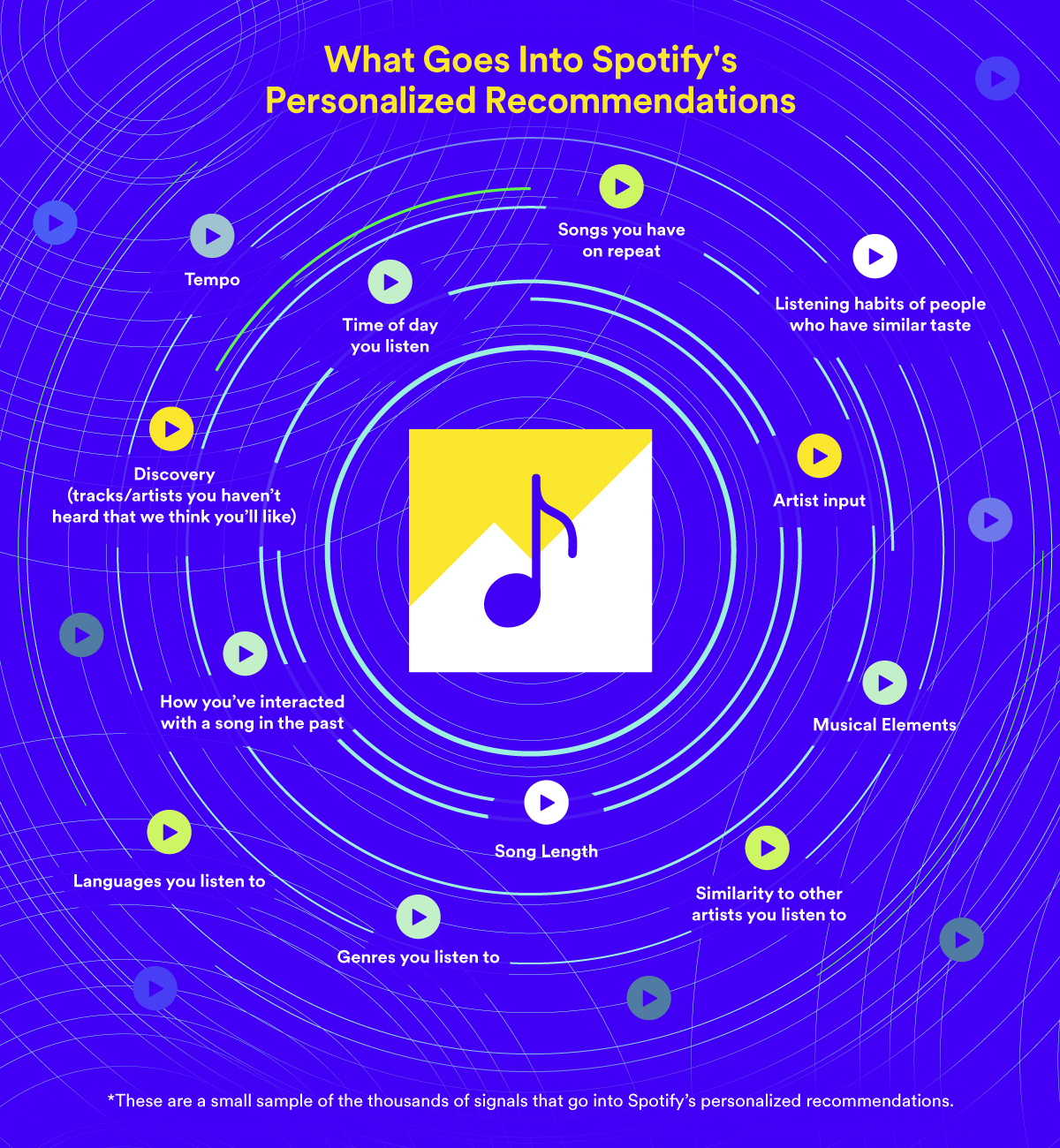 Spotify's competitive edge is the amount of data it holds on listeners and the way it uses that data to increase engagement. ... Using the same underlying data and technology can provide unique insights to record labels and artists about who's listening to what and help them reach more listeners.

The Spotify algorithm sets itself apart from other digital music streaming services. The algorithm is an AI system known as BaRT (an abbreviation of Bandits for Recommendations as Treatments). Basically, BaRT’s job is to keep listeners listening. It does this by playing and suggesting songs it knows the user is familiar with, while dropping in some fresh tracks it thinks they might like, but most importantly, haven’t heard before.

This makes sure the listener is engaged, but things never get boring.

BaRT decides what to suggest to listeners by combining two concepts – Explore and Exploit. This combination is the key to the platform’s recommendation system.

Explore, on the other hand, is all about everybody else and their usage. While you're exploring, Spotify starts looking for similar artists and playlists to what you're listening to. The platform also looks at the popularity of the playlists and artists you have not heard of yet. Spotify basically makes recommendations this way.

When you're a musician or you're planning to release a song on Spotify, knowing how the Spotify algorithm works is essential to maximizing your success through the platform.

How do you 'beat' the Spotify algorithm?

If you are trying to beat the Spotify shuffle algorithm, you need to remember their 30-second rule. Your song should grab the listener immediately and make them stay for more than 30 seconds. Otherwise, regardless of how many listeners initially listen to your song, it won’t count if they don’t pass that first 30 seconds.

Also, remember that timing is everything on Spotify. For example, the first 24 hours after your track drops are crucial to your success, and to gain momentum.

One of the ways to get the algorithm to notice you in this timeframe is by getting a pre-saves boost before your release date... but to get that, you need to get potential listeners to pre-save your song.

I personally have issues with the way some artists use pre-save. Let me explain. Unless you already have a large fanbase, it will be a challenge to get people to pre-save a song that they haven't even heard as a sample. There are a number of services that simplify pre-saving, but a large number of these sites do not facilitate giving the listener a preview of the song.

Be honest here.... would you pre-save a song if you hardly know what you are getting? I wouldn't... especially if I cannot indicate where the pre-saved song will be saved (in which playlist). My recommendation is to create a landing page for your song / album marketing campaign that includes track previews. Your landing page should have a link to your pre-save service in case a listener is interested. The other way around is also important... on your pre-save page you should include a link back to your landing page, so that visitors have a way to hear the song first (this is important in case a visitor first lands on the pre-save page).

If your provider is not giving you a possibility to include links to your landing page on the pre-save page, then I personally recommend looking for another provider that does. Some artists think that they are doing their potential listeners a favor by offering a pre-save... but that is the world upside down! Potential listeners are doing you, the artist, a favor by pre-saving your song! Make it worth their while!

Besides pre-saves, also pay serious attention to the competition. Be aware of similar artists that possibly may be applying the same strategy as you. For example, you may want to avoid dropping a track on the same day as popular artists. Consider dropping a track on a different day... e.g. on Thursday (most artists drop their tracks on Friday). Dropping tracks on other days than Friday has a downside if you are trying to increase your chances of getting on the New Music Friday playlist. You may want to alternate your release days between Friday and the other day of your choice.

By avoiding dropping tracks on the same day as most of your competition, you can naturally increase your chances to beat the Spotify algorithm.

How do I get more recommendations on Spotify?

Releasing a new song on a Friday is generally accepted as it gives you a greater chance of getting on the New Music Friday playlist. Getting your song into Spotify algorithmic playlists can boost your stream count as well. One way to improve your possibility of getting on these playlists is to use a valuable tool at your disposal that you already have – your fanbase.

Ask your fanbase, your friends, and even family members to put your song in the number 1 position on their playlists. This will help the Spotify algorithm to better detect and notice you.

Besides your fanbase, also build a network of playlist curators, people who manually curate Christian Music playlists. These human-curated playlists have followers, and the playlist curator determines which songs are added and in which order. Build a constructive relationship with these curators. Get to know when they refresh their playlists and how long new releases are listed. Avoid playlists that list a new release for less than 2 weeks. Remember that Spotify is very good at collecting and processing data, and Spotify will see listings shorter than two weeks as being negative. Public playlists can exponentially boost the number of people listening to your release.

It is also important to correctly tag your songs in Spotify for Artists. Each week, we search through multiple sources for newly released Christian music. Our search starts in the Spotify music database, using filters to find Christian music by filtering based on tags. The majority of the new releases that we publish later in the day are found this way. In the next step, we scan release calendars published by other sources. Our team spots Christian music through release calendars and news articles every week that was improperly tagged. We found their releases through sheer luck and persistence. How many potential listeners are you missing by tagging a release incorrectly or poorly? We know for a fact that there is excellent music (even from popular artists) that is not being discovered because the agent/distributor failed to correctly tag their music. When you (or your agent/distributor) correctly tag and pitch your tracks to Spotify playlists directly, the platform will be able to recognize which playlists they should be recommended to and to whom.

Having incorrectly labeled tracks will result in the wrong users seeing them and skipping your song during the first 30 seconds. Spotify considers skipping before the 30-second mark to be negative. This is why correctly tagging your tracks is extremely important.

Tagging music is so important, that we published an article on July 7th (2021) that explains how and why to tag your releases on Spotify (see: https://blog.christiandance.eu/2021/07/how-to-build-larger-audiencefanbase-for.html).

Now, if you are an artist and you don’t already have an artist account on Spotify, then you should make one right away. Get in control! Fill in your profile. Give the reader of your profile quality content that helps to understand what to expect. The moment that they click on your music, you want them to stay at least for 30-seconds. Anything less is going to hurt your statistics! Help to prevent wrong expectations by giving quality information upfront!

By neglecting to do your part, you won’t be able to achieve your Spotify promotion goals.

A better understanding of this algorithm also helps you to better understand what your listeners appreciate! It helps you with insights about what music will work in receiving more streams or fans. This is an extremely valuable insight that can further boost your success.

Success on Spotify is not just about making music... it is about making music that people want to listen to and reaching new audiences that most likely will also appreciate your music. So invest (more) time to understand how this algorithm can help you.