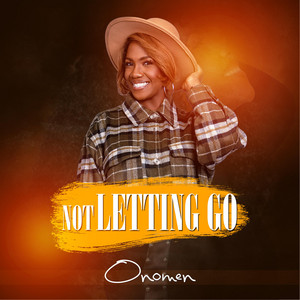 Onomen has released a Gospel album called 'Not Letting Go'.

The title song 'Not Letting Go' is a song about holding on to God despite the circumstances. 'Every word, lyric, and melody in this album is a response to God's never-ending love and his perfect plan for me,' Onomen says. 'My intention was to release an album with words that would encourage and remind us of God's consistent love and perfect plan.'

'My primary goal in writing "Not Letting Go" was to express my heart's response in these simple words: "I AM NOT LETTING GO." Months before that, I had been pondering the overwhelming love of Christ, which does not change despite our shortcomings. I've seen that when we fail, He has already made provision for our redemption through Jesus, isn't that amazing? I told myself that if He won't let go, neither will I. So even if I'm not meeting expectations when I should be, and I'm only hanging on by a thread, I won't let go. I chose it as a solo piece because I want everyone who hears and sees it to enjoy it.'

After years of writing and composing songs for various local and national choirs, Onomen, a Nigerian-born Canadian, made her debut with the single 'I Love You' in 2021. Prior to the release of this debut album, 'Not Letting Go', she has released two other singles, 'My King Is Coming' and 'Holy Spirit.' Onomen is an impassioned gospel singer who believes that music can bring healing and clarity. She has worked with several choirs comprised of the elderly, adults, young adults, and children, and her goal is to continue raising passionate worshippers for these challenging times. Onomen currently works part-time as a vocal trainer and part-time with a choir she co-founded.

Except for 'My Good,' Onomen wrote the majority of the songs on the album. Tolu Adeosun aka Mama Tee wrote 'My Good.' Onomen and Tolu collaborated on the song 'Aye Captain.'

Tolu and Greatman Takit aka 'Melody Man,' co-wrote the hip-hop song 'Ride With Me.'

Emmanuel Awipi produced the majority of the songs, with Basil Frank divine (DBF).

Her first three singles were produced by Vovwe muoghereh. Mynorkord mixed and mastered the majority of the songs.

You can listen to the track on Spotify: https://open.spotify.com/track/6BIctMBB9vx4QuG3GQOvYs

Here is a link to the video on Youtube: https://www.youtube.com/watch?v=zEf_xW6-ArM

January 27, 2023
We've most likely all had times in our lives when we felt broken and shattered, as if there was no way to put the pieces back together. Amanda explains that her song is about God reshaping the broken pieces of our lives into something better than they were before. She says: 'When we feel we are a lost cause, Jesus picks us up piece by piece and makes us a masterpiece through closeness with Him. He picked up all of my broken pieces, and he can do the same for yours.' The song's lyrics beautifully express this message. Amanda sings about the broken pieces of her heart scattered on the floor and how God can use broken pieces to create something beautiful. She sings, 'I give You all my broken pieces, with You I know I can leave it. You're the God of stained glass miracles, You're making all things beautiful.' Amanda continues to sing about how God sees the beauty in scars and the art in broken pieces. Every masterpiece is actually made up of broken pieces, a
Read more

September 20, 2022
On Friday, September 16, Don Moen, Rachel Robinson shared new music with this track titled 'Goodness of God (feat. Rachel Robinson)'. Here’s a song from the eminent American gospel singer, pianist, pastor and Praise & worship leader “Don Moen“, whos songs have always been blessing lives. This song is titled “Goodness Of God“, and has been the trending song ever since the original version was released in June. This version, featuring Rachel Robinson, makes the song even more special to listen to. We are happy to be able to share the lyrics with you. The official audio can be heard below. Lyrics: Read “Goodness of God” by Don Moen on Genius https://genius.com/Don-moen-goodness-of-god-lyrics You can listen to the track on Spotify: https://open.spotify.com/track/42qE75HgQ2cpwB5NOw241l Here is a link to the video on Youtube: https://www.youtube.com/watch?v=690BkuwNsJ8 Would you like to hear more CCM music? Then check out our Christian playlists on: https://www.christianda
Read more
Discover the latest Christian music releases and check out our exclusive Christian Top 100 Charts (CCM, CEDM, and Gospel). We also offer a wide selection of human-curated playlists for various Christian Music genres. Stay up to date and find your new favorite songs with us.