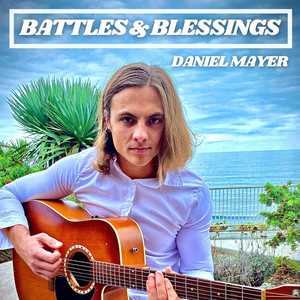 This song is an expression of Daniel's unapologetically Christian faith, breaking into the contemporary Christian music world where he is not afraid to speak what is on his heart and give all of his praise and creativity to God.

'Let Your Light Shine' has a catchy melody and lyrics that remind me of a passage from Matthew 5: 14-16: 'Ye are the light of the world. A city that is set on an hill cannot be hid. Neither do men light a candle, and put it under a bushel, but on a candlestick; and it giveth light unto all that are in the house. Let your light so shine before men, that they may see your good works, and glorify your Father which is in heaven.'
Nobody lights a candle and places it underneath a table because the light will be obscured if you do so. To allow the candlelight to shine fully, light the candle, place it on a candlestick, and place it on a table. That candle is lit by God, and it is for us to shine so that all may see. This is the message I also take away from this song.

Daniel, who was born in the Rocky Mountains and raised in the City of Angels, has been playing guitar and singing since the age of seven and has trained and worked as an engineer/producer with leading professionals in New York, Washington D.C., and Florida. Beginning with a snippet of a melody in his head, he layers hip-hop-influenced drum machines/synths over his signature bluesy and psychedelic guitar licks, as well as his distinct alternative rock/pop vocal melodies. Daniel presents himself as a praising poet, giving all the glory to the Lord.

You can listen to the track on Spotify: https://open.spotify.com/track/62CJtC27zYSDLwG8r5T70o

Here is a link to the video on Youtube: https://www.youtube.com/watch?v=EXc2dBDNytM

Would you like to hear more Less known music? Then check out our Christian playlists on: https://www.christiandance.eu/playlists