How To Identify Fake Spotify Playlists

Having fake followers on Spotify playlists reduces your chances of being placed on the algorithm-driven playlists, provides you with low royalties, and reduces your chances of receiving streams.
In today's modern music industry, one of the indicators of success for an artist is how many streams they have. (This is also the primary reason why we ignore sales data when compiling our Top 100 charts.)
You, as an artist, have better bargaining power and more monetary compensation the more streams and followers you have.
You may gain more exposure through large Spotify playlists, but here's the catch... It is possible to find a lot of large independent playlists comprised entirely of fake accounts! Just the fact that they use fake accounts should be enough to steer clear of them.
In making these playlists, curators exploit artists who seek exposure from Spotify playlists to leverage their popularity in the music industry. As a result of these exploits, not only are the artists' names being harmed, but the entire music industry is also being hurt.
If you're looking to make it on Spotify playlists on your own and gain subscribers, then here are some things you should watch out for when checking playlists.

1. The same amount of listeners and streams

It is a red flag when a playlist has the same number of listeners and streams. It is most likely a fake playlist if your song has been added to a playlist and you reach the same amount of listeners and streams on that playlist.
You'll have more streams on organic streams or playlists compared to listeners because people tend to play songs often. Listeners and followers aren't the same thing. Do not confuse them. Followers only let you know that a playlist has been marked as a favorite. This is no indication at all that these subscribers are actively listening to that playlist. As an example, I follow a number of playlists. I'll choose a playlist based on my mood and the atmosphere I want to create.
Thus, it's nearly impossible to have the same amount of listeners as well as stream count.
You can see two playlists in the example below.

2. Every playlist follower listens to your track in a single day

Sit down and look at how you use playlists. Will you listen to each and every playlist that are you following? No way! If a playlist has thousands of followers, how many of these followers will be listening to that playlist each and every day?
Look at the number of tracks in a playlist and the total number of hours... If you were an active listener, would you appreciate hearing the same songs over and over again? No! You will skip from one playlist to another. So, will all playlist followers actually listen to your track in just one day? In my view, that is impossible!

Some services promise "guaranteed streams". How can they deliver on that promise? How can they control who will listen in order to deliver on that promise? Even if a service has a huge fanbase, like some radio stations, not every listener will start streaming your song because the DJ asked them to start streaming? The same applies to posts on social media... You may occasionally see a post come by that triggers you to listen to a song, but no service can actually guarantee any volume of streams... unless it uses fake followers / streams in order to deliver on their promise.
As an artist you are running a serious risk Spotify finds out that you’re getting fake followers or streams. You may get banned and lose your chance to appear on the platform’s homepage, organic playlists, and search results. "Guaranteed streams" is not going to get you anywhere closer to your goals... on the contrary... guaranteed streams may actually ruin your chances to grow on the streaming services.

Stay away from playlist curators who have suspicious followers without a profile picture and a real name. Agreed... not everyone uses real names in their profile and will upload a photo, but a profile is most likely fake if almost all followers have strange names and no photo.

Look at the following example. It is easy to spot the fake followers... and there is a big chance that these fake followers are being used to generate fake activity in the playlists of this curator. 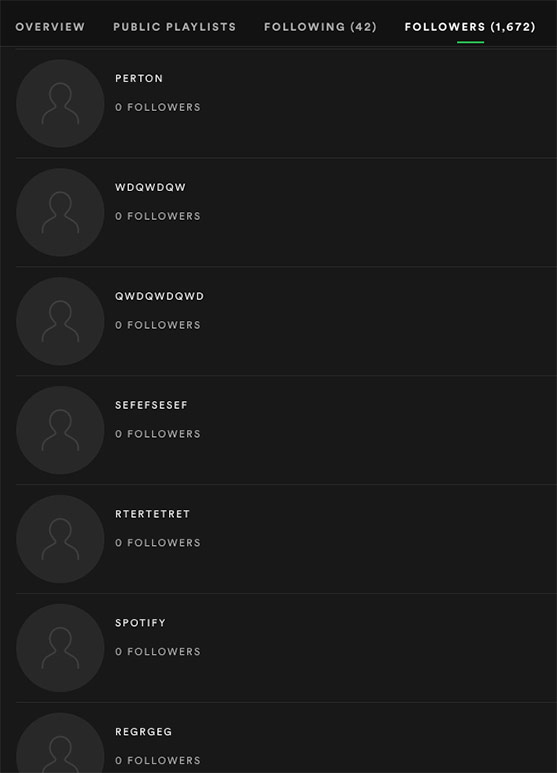 5. The playlist doesn’t appear on the ‘Discovered On’ on an artist’s profile

Playlists with real activity will appear on the ‘Discovered On’ from the artist’s profile.

So, stay away from playlists that don’t appear in the 'Discovered On' on any artists page. Even if these playlists are not fake, you can be sure that they are not really contributing to your success! 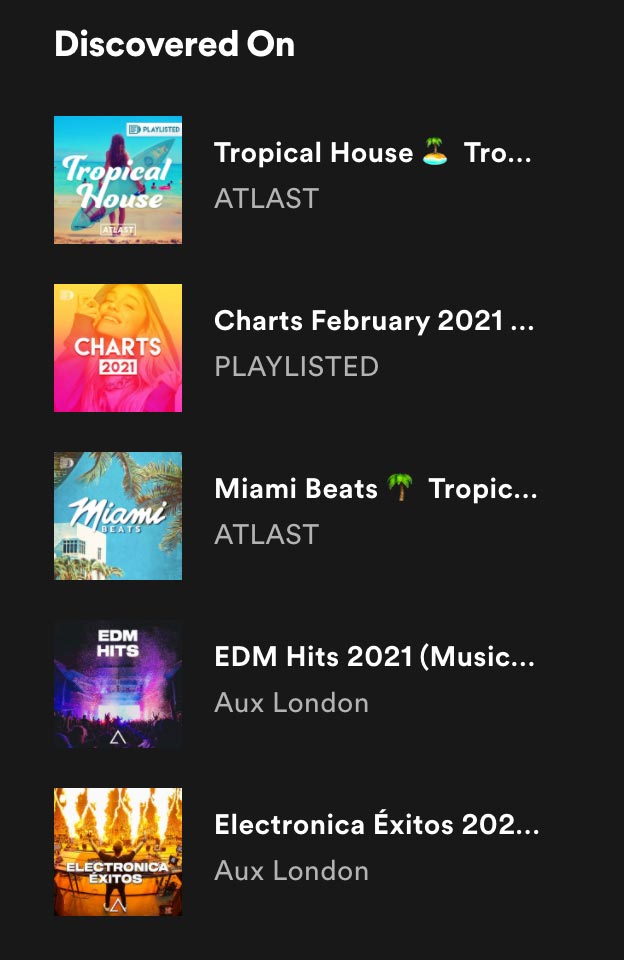 These are just a few of the major red flags that you should be aware of with regard to music marketing companies or major labels on the internet.
One of my favorite tools is called Chartmetric.com. Chartmetric offers a user-friendly tool to analyze artists, releases, but also analyze playlists.
Chartmetric captures historical data, so it is easy to see the growth of followers and songs for a playlist. I use it to see if the growth in the number of followers looks suspicious or not. Any playlist that goes from 0 to a couple thousands of followers in one day is suspicious. There has to be a legitimate reason. I have seen radio stations with a large fanbase release a new playlist that was actively promoted to their listeners. That explained the rapid growth. But a normal playlist that goes from 0 to 10,000 in a day (and stays there) is most likely a fake playlist.
Look at the following playlist. This chart is showing how the playlist developed during the 28 days (this is the date range for free accounts). The 28-day chart starts with approx. 11,500 followers and you see changes up and down leading 15,078 followers. Is this a real or a fake playlist? 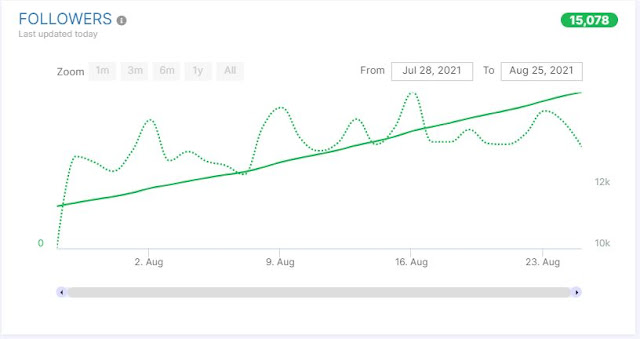 To me, this feels like a real playlist with organic growth. Listeners come and go regularly and that looks organic.
Having said that... If I come across a playlist with lots of followers, and I like the content, regardless if it is fake or not, I will probably follow it until I don't see the added value of keeping it on my list. In this specific case, this is a real playlist, BUT the owner of the playlist hardly refreshes the content. Most of the songs have been on this playlist for more than 2 years, and the last addition was a year ago.

I wouldn't have known unless I use a tool like Chartmetric. Bottom line - this is a real playlist and the curator is hardly putting any effort into keeping it fresh. In my view, the growth is caused by people who are curious because of the number of followers and/or someone else they know is following it as well. But when they realize that the content is stale, they leave... Not everyone is actively cleaning up their list of followed playlists, and that is why it is still growing. Chartmetric provides me with enough (Free) insights to make a fairly informed guess about the quality of a playlist.

Why You Should Avoid Fake Spotify Playlists?

Spotify is the largest streaming service. One of their strengths is analytics! With so many subscribers and so many tracks, they have a huge amount of data that they can analyze. Spotify has implemented Artificial Intelligence to analyze listening behavior and uses machine learning to detect anomalies. Machine Learning gives Spotify the ability to detect attempts to cheat the algorithm. That is why bot-based placements won’t help you gain playlist placements on Spotify.

So, if you want to succeed as an artist on Spotify, you should avoid fake playlists at all costs!

Here are a number of reasons why you should avoid fake playlists:

Little / no exposure to potential listeners through the Spotify algorithm

You can gain more exposure by getting your music on algorithmically generated playlists such as Discover Weekly and Release Radar. The algorithm will ban you if it detects you are creating fake playlists or tricks. In such cases, you will solely be dependent on your own marketing efforts.
These algorithmically generated playlists are not to be underestimated! Listeners will be presented with new songs that Spotify thinks will interest them and that they have not heard before... according to the listener's past listening behavior.
As listeners like your track (e.g. give it a like, add it to a playlist, and listen again), this feeds the algorithm that makes the song recommendation to new listeners.
When you use fake streams, there are no interactions. The song is not being saved or added to playlists. For a moment, let's assume that Spotify hasn't yet detected the fake playlist... this will cause the platform algorithm to mistakenly conclude that listeners don't really like the song. You lose all chance of getting real exposure and placement on Spotify playlists if the algorithm thinks that no one really likes your track.

The numbers have no meaning

Streams are meaningless if no one actually listens. Having followers means nothing if they do not listen. Your business cannot grow from nothing!

You risk the possibility of being banned / suspended.

If Spotify detects fake streams for your album, it may ban it from appearing in organic playlists (It's not a matter of IF they detect it, but when - and sooner the better.)
Spotify does not want to pay out money for fake streams (if a song is streamed for more than 30 seconds). Therefore, when they detect fake streams, you are at risk of getting suspended and maybe even having your album removed as well... leaving you with good music but no platform to reach the people who would be interested in listening to it.

So, how do you get more listeners?

There is an extremely powerful tool that is already available to you that can get your music in front of many listeners and allow you to interact with them. How? SOCIAL MEDIA (if it is working... thinking about the recent Facebook outage)! My advice is to always combine your online presence with a website. The website is the core system, and social media is a channel that is being fed from the core. That way your content doesn't disappear if a channel disappears or loses popularity.
Check out our previous articles about Music Marketing and see how you can best use the available tools to interact with your fanbase and new listeners.