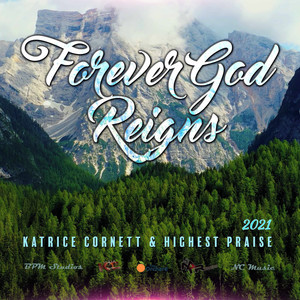 Katrice Cornett & Highest Praise has released a Gospel track called Forever God Reigns. Katrice is a talented Gospel singer, and has embarked on an amazing musical journey. We have included her bio at the end of this post.
After about 4 years on an official break, Katrice Cornett and Highest Praise were reunited in 2020.  They are so excited about what God is doing in this season.  Forever God Reigns is their NEW Single.
This track is an anthem of praise and adoration of the power of God, His majesty, and authority!
Lyrics 'FOREVER GOD REIGNS':
The heavens declare His greatness
The angels cry holy
All creation sings His praises
And I was made to worship Thee
I was made to worship Thee.
Hallelujah Thine the Glory
Hallelujah  Amen
For the Lord our God He is worthy
To His reign, there is no end
Our God reigns in majesty
Our God reigns with authority
King of kings Lord God almighty
I was made to worship Thee
I was made to worship Thee
He reigns
He reigns
Forevermore

You can listen to the track on Spotify: https://open.spotify.com/track/6CkorsZO0rqGKvoYKPemAa

Here is a link to the video on Youtube: https://www.youtube.com/watch?v=NTO5jr9j7VM

Hailing from the city of Baltimore, Maryland, Katrice Cornett had music engraved in her soul at a very early age. Under the direction of her father, the late Donald W.T. Cary she was exposed to her first professional performance at the age of four when she sang “Oh Happy Day” by Edwin Hawkins to a standing room only.

As her father began to cultivate the gift that rested in her vocal ability Katrice began to get more comfortable ministering to the needs of people through her music. During her teenage years, she experienced major changes in her family structure, academics, and spiritual life, which contributed to the family migrating to West Deptford, New Jersey where she became more dedicated to the ministry of music.

After receiving such a strong foundation from her father, Katrice embarked upon one of the greatest challenges and formed her own gospel group called Katrice Cornett & Highest Praise (referred to as HP). The group quickly became South Jersey's premier musical talent and began securing bookings throughout the east coast as south as North Carolina to the deep north of Connecticut. In 2006, Katrice released HP's first project recorded live entitled “Brand New Day Live."

Katrice has shared the stage with multiple artists including but not limited to Pastor Charles Jenkins, the late Timothy Wright, Donald Lawrence, Stephen Hurd, Donald Malloy, Milton Bingham, and others. She has received acclaims for outstanding vocalist and voice coach from numerous ministries, pastors, and artists for her musical style and dedication. However, after vigorously promoting her new project and working on other projects, events and singles over the years, Katrice decided to step out on faith and open up the HP Performing Arts Center in Atco, New Jersey in 2011. She used the teachings from her father to pay it forward to others in need of vocal training and theatrical production. During her hiatus from the music industry Katrice's son, Jermaine Jones, became a top 10 finalist on Season 11 of American Idol. Such an honor immediately catapulted her back into the music industry as she represented Jones in all his booking engagements and business decisions.

After getting reacquainted with the music industry Katrice believes she is ready to re-establish herself in the Gospel music industry and make dynamic and bold moves that will bridge the gap between the churched and the un-churched. Katrice’s faith in God and her strong belief in the Word have kept her focused and determined to share Christ with the world through her music. Katrice believes that only what you do for Christ will last. She lives her life in accordance to Colossians 3:23-24 "Whatever you do, work at it with all your heart, as working for the Lord, not for human masters, since you know that you will receive an inheritance from the Lord as a reward. It is the Lord Christ you are serving."