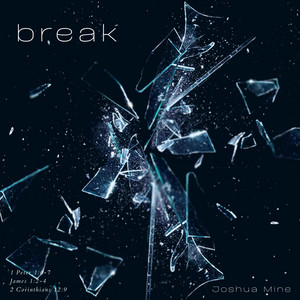 Joshua Mine released a new song called "Break".
“Break” was inspired by a sermon titled “Don’t Waste Your Pain” by Pastor Rich Wilkerson from Vous Church in Florida, US. For many, 2020 was a very difficult year. Along with the global pandemic crisis, Joshua faced personal trials, which included losing loved ones, losing sight of direction in life, and losing purpose in living. However, God spoke to him through this sermon and in his time with God, that He was still moving in the midst of it all. The message of this song is that sometimes God uses pain to break walls down in our lives to expand our capacity so that we can fulfill and experience more of what He has in store for us. Three Bible verses are shown in the single jacket in hope that listeners will turn to those passages to grasp the full depth of the message.

Joshua Mine is a 20-year-old singer-songwriter from Tokyo, Japan. His father is Japanese and is a pastor at a local church, and his mother is Australian who grew up as a missionary kid in Japan. He started writing songs when he was 18, one night after being powerfully touched by God during worship. At the same time, he got into producing his own music, learning to mix and master through YouTube tutorials, etc. As he kept uploading his originals on Soundcloud, he was noticed by a producer/artist from Brazil who currently has over 1 million monthly listeners on Spotify and was asked to collaborate on a single. This single has now reached 400k streams. That being the turning point, Joshua decided to work on songs to officially release on major streaming platforms. His musical journey has been inspired by Rivers & Robots, a Christian band from Manchester, UK. When they came to perform at his former high school, he realized that worship songs do not have to sound one particular way, and that they can be expressed through various styles of music. Ever since, his goal has been to make songs in his own style that can also reach people who are yet outside the faith and speak to their souls.

You can listen to the track on Spotify: https://open.spotify.com/track/1mea67zGRVniYDlnIk2Wh9

Here is a link to the video on Youtube: https://www.youtube.com/watch?v=fowmxYKCqZM