Which Top 50 Chart is more reliable? Billboard or ChristianDance.eu?

Since we started to publish our own Top Charts, we have been asked why our charts differ so much from the charts published on Billboard... and which charts are more reliable.

Let me start off by saying that both charts are reliable... but... comparing these charts is almost like comparing apples with pears.

So what is the reason that the charts differ?


When combining these numbers into a ranking, Billboard adds a weighting into their formula.

We only look at one value to determine the ranking on our Charts:


Billboard uses two values in their calculations that we believe are given too much importance when ranking the songs in the charts.

Let's look at each of these sources...


How often did someone buy the song

There are so many platforms that sell songs. It is impossible for anyone to track all of the sales from each of these platforms... so choices need to be made, and these "stores" need to be representative for all buyers across the globe. Yes, somewhere in the workflow there is money flowing to the artists from each of these sales channels, but where are the metrics being gathered, and does this cover each and every sale?

On top of that, there is also a big question on what weight this value should be given. You only buy a song once, but how often will you play the song? What weight should we give this category of songs? How many people still buy individual songs/albums (CD's and/or digitally)? If they buy an album, which songs on the album get the credits? Are all songs on an album equal in weight? I have bought songs that I have played hundreds of times, and I have bought music that I may have only played 2 - 3 times. I have CD's/tracks that I haven't listened to for years, but for some reason or other (e.g. an artist passes away) I will play that music again.
So what number should one associate to these tracks? How do we measure this?

There is a lot of subjectivity in these numbers, that it is a challenge to determine which parameters should be used to represents the listeners.

How often has the song been aired (radio)

If you thought that the numbers around sales of a song were complex, then radio airing is even more challenging. It is impossible to track airing of songs for all radio stations across the world... so once again choices must be made? Which radio stations? How about internet radio streams? If we track traditional radio (ether) then how many listeners are they really reaching? There is no way to measure the number of listeners on traditional radio, except via questionnaires and tracking of listening behavior of special groups that provide details about their listening. Who says that these groups sufficiently represent the musical genres that we are trying to rank?

The number of times that a song has been streamed is the most objective of all metrics used to determine the ranking on the Charts. It is very accurate (and must be) because the streaming data is used to determine how much money artists will receive for making their songs available on each of these platforms.

The second most reliable source for ranking is the number of sales, but subjectivity immediately comes into play as soon as any type of weighting is applied to reflect how often a song will be played.

The following image shows some of the differences between our Charts and the Billboard Charts (click on the image to see it in full): 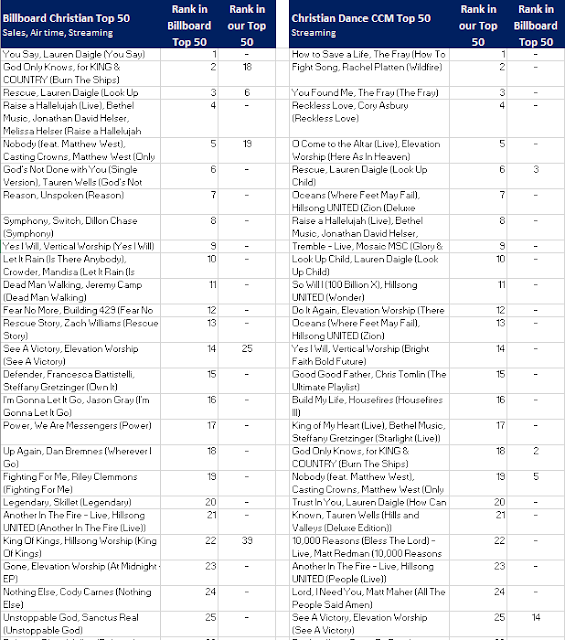 When you put the charts next to each other, you will see a number of songs that are listed on both charts. There is a significant difference between the two lists. Five songs in the Billboard Top 25 appear in our list. Four songs in our Top 25 appear on the Billboard list. If we look at the Top 50, then we each have only 6 songs in common.
The steaming data between Billboard and ChristianDance.eu is assumed to be identical, because the major platforms are very happy to give this data to any serious partner... and Billboard is definitely a market leader.

So, in our opinion, the differences are caused by the gathering and processing of sales and airing data.

We also feel that the data for sales and airing is given too much weight... especially when we look at the number of listeners that have subscribed to streaming platforms and how these numbers continue to grow.